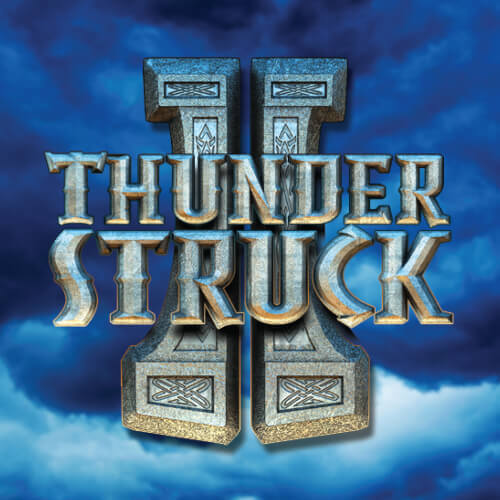 As well as the astonishing graphics that draw on Norse mythology, Thunderstruck II wins fans thanks to its 4 enticing bonus features that tempt you with appealing payouts. It’s a good game for cautious gamblers who still want plenty of bang for their buck, with bets beginning at 30p and the maximum bet capped at only £15.

There is no question that one of the biggest attractions of Thunderstruck II is the stunning graphics, which combine Norse images, lightning, wild thunderstorms, and the larger-than-life Norse gods like Thor, Loki, and Odin to captivate you.

The eerie music playing in the background only adds to the wild excitement of the game.

Although everyone wants to win, the jackpot isn’t the main reason for playing Thunderstruck II. You’re really in it for the captivating graphics and thrilling gameplay. But don’t start thinking that it’s not worthwhile to play Thunderstruck II. The biggest jackpot that you could possibly score on is a payout of 8,100x your stake with Loki free spins or the Wildstorm feature, which isn’t bad at all.

There are also plenty of smaller wins, like 250 coins for 5 matching Valhalla symbols and 500 coins when the reels show a line of Thor. Thunderstruck II is quite a low variance game, which means that it’s a great choice if you like to get frequent wins, however small they may be.

The betting range for Thunderstruck II is also fairly low, ranging from a minimum of 30p per wager up to just £15, so it’s not the right choice for seasoned gamblers who want the thrill of high stakes.

Although there are a lot of fascinating animated graphics going on around the reels, the basic gameplay for Thunderstruck II is quite straightforward. You’ll just need to choose your bet and press Spin to get the reels moving. A line of 3 to 5 matching symbols is all it takes to win you a payout, but the real wins are waiting in the bonus features.

There is an autoplay feature if you don’t want to spin the reels manually. You can set it to run for 10, 25, 50, or 100 spins without your input. If you’re feeling impatient, there’s also a Quick Spin option.

As you’d expect, everything in Thunderstruck II relates to the Norse mythology theme. As well as the 9 through A cards, you’ll find these symbols appearing on your reels:

If you see three Mjolnir symbols on your reels, you’ll trigger the Great Hall of Spins, which is your gateway to Thunderstruck’s exciting and valuable bonus features. You’ll need to earn your way up through the different free spin levels, each with its own multipliers, bonuses, and free spins.

One last unusual feature on Thunderstruck II is the Wildstorm, which appears randomly and turns 5 reels into wilds for a spin, helping you to win big.

You don’t need strategy to enjoy your experience with Thunderstruck II. All you’ll need to do is sit back and enjoy the gameplay as the reels spin. The only tip to bear in mind is to decide beforehand how much you can afford to gamble on Thunderstruck II and make sure to stop when you reach your limit.

It’s good to know that Thunderstruck II has a save function, so you can walk away for a while and come back again later without losing all of the progress you’ve made.

Microgaming has been one of the leading game developers for a long time, winning multiple awards for its high-quality slots, attractive jackpots, and thrilling gameplay on games like Avalon and Immortal Romance as well as both Thunderstruck games. It’s also led the way in promoting ethical gaming as one of the founding members of the international organisation eCOGRA, which is responsible for ensuring fair gaming and protecting players.

Since the first release of Thunderstruck II in 2010, Microgaming has given it a total overhaul to ensure that the gaming experience is just as compelling on mobile or tablets. It’s been updated with HTML 5 technology so that you can enjoy the entertainment of Thunderstruck II on your iOS, Android, or Windows devices wherever you go.