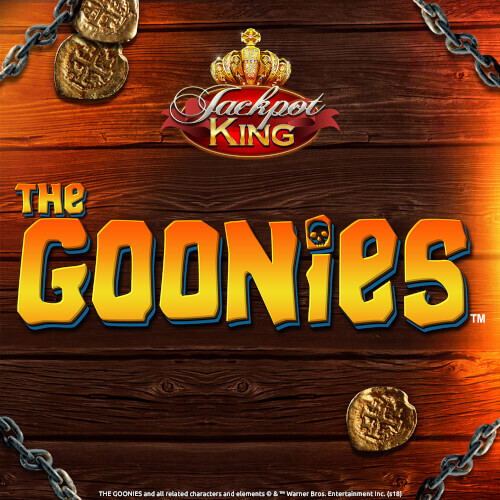 The Goonies Jackpot King is a progressive jackpot version of the beloved Goonies slot game with 5 reels and 20 paylines. The maximum jackpot is a huge £250,000, so it’s well worth a punt.

It’s got the same fantastic Goonies theme going on, with the game played against the background of a treasure map and full of symbols that relate to the movie, like a pirate ship, Jolly Roger, treasure chest, and more, but it’s been made even more exciting with bigger jackpots and more ways to win.

If you love The Goonies, and you love the thrill of a gamble, you’ll love this game. It’s as simple as that.

The whole game is faithful to the movie, with clips mixed in with the action, plus it opens with the classic quote, “Goonies never say die”!

As you can probably guess from the name, the Goonies Jackpot King is all about the jackpot! To trigger a jackpot king payout, you’ll need to land five Jackpot King Deluxe symbols, and then spin the reels to get 15 or more crown symbols.

Here’s where it gets really intense; you’ll need to choose an icon to see either spin, collect, or wheel king. The wheel king section is where you’ll need to put together multipliers and progressive jackpot wins to hit the massive jackpot king payout. The highest payout is £250,000, but there are smaller wins along the way. Even the lowest-scoring Queen and Jack symbols deliver 2.5x your bet if you get a combination of five.

How To Play The Goonies JPK Slots Game

The Goonies Jackpot King is deceptively simple. Enter your stake, hit the button to get started, and watch the reels spin!

There are 6 reel modifiers that can kick in at random to give you a boost. They are:

If you get 3 or more bonus symbols, you’ll get to spin the wheel for one of six bonus games. Here are your options:

You can use the Goonies Go Wild symbol as a substitute for any symbol except the bonus symbol.

If this sounds rather confusing, don’t worry: you can use the autoplay option to help you along. You can also pull out the paytable by clicking on the button in the far-left corner at any time so that you can keep track of your progress.

As you’d expect, the Goonies Jackpot King is full of special characters and features from the movie. The symbols in the game are:

The Goonies Go Wild and the Jolly Roger are the highest paying symbols, paying 25x your starting bet if you get 5 of a kind. The pirate ship and treasure chest deliver 15x on your bet if you get a combination of 5, and the skeleton and the scales payout 10x for 5 of a kind. Moving on to the lower payouts, 5 of a kind of the Ace or King gives you 5x your bet, and the Queen and Jack give 2.5x your bet for a combination of five.

Playing The Goonies Jackpot King requires a certain amount of strategy because you’ll want to choose the right mix of symbols to trigger the highest jackpots. You really want to get the Jackpot King Deluxe symbols that move you into the part of the game that leads to the progressive jackpot, but don’t ignore the bonus rounds, which can boost your payout tremendously.

The Goonies Jackpot King is made by Blueprint games as a kind of sequel to their really popular original Goonies slot game. It boasts excellent graphics, surprising background sound effects that draw you into the Goonies movie, and even short clips of the original film scattered among the action.

Blueprint is responsible for a number of other fun and quirky slot games like The Pig Wizard, Duckula, and Pegasus Rising, as well as movie-inspired slots like Casper, Ted, and Spinal Tap.

The Goonies Jackpot King on Mobile

Like hundreds of other Blueprint games, The Goonies Jackpot King gives an excellent experience on mobile, too. You can play it on Android and iOS to enjoy a dose of The Goonies adventure action wherever you go.