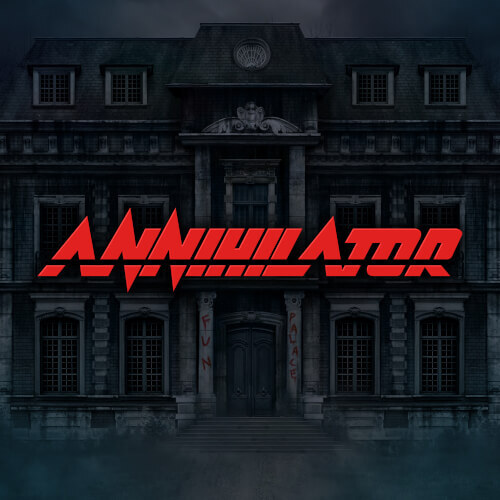 If you’ve enjoyed the energising tunes of Annihilator, the wildly-popular thrash metal band that hails from Canada featuring Jeff Waters and John Bates, then you are going to be simply smitten with the new Annihilator slots from Play ‘n Go. A heavy metal-worthy slot machine, the Annihilator game promises some thrills, chills, and spills in a sensational new gaming platform. With free spins, bonus features, and the best soundtrack you’ve ever heard, the Annihilator slot online game has it all. Dare to continue? Then test out the Annihilator slot machine, and get ready for an online slots fright-fest like you’ve never experienced before!

Gamers beware. The Annihilator slot game is not for the faint of heart. The macabre and downright twisted setup is enough to scare away all but the most resolute gamblers. But then again, if you’re an Annihilator music fan, you’re probably made of tougher stuff than that.

The Annihilator game starts off on a dark, brooding night. An abandoned mansion stands behind iron gates with menacing clouds and lightning flashes looming in the sky.

Then, there are the reel symbols, as gruesome as you could imagine. They include voodoo dolls, bloody symbols, the flaming Lucifer, and some truly tormented souls. The whole design paints a disturbing picture, and fans of the genre will absolutely devour every minute of it.

But the piece de resistance of the Annihilator game is the musical accompaniment. Annihilator’s best hits play constantly in the background, making for a concert-like experience fans are sure to devou

The Annihilator online slot game isn’t just a smashing success because of the cool graphics and terrific soundtrack. This game also features a massive jackpot, up to 5000x your wager. Of course, with all of the bonus features packed into the Annihilator game, it’s not really surprising. You can accomplish the top jackpot prize by triggering the Set the World on Fire feature and filling up the paylines with the Jeff Waters wild symbols.

How To Play Annihilator Slots Game

Play the Annihilator slot game like you would most any other slots. Set your wager by clicking on the denominations at the bottom of the screen. Then, click the spin button. When the reels stop, see if there are any matching symbols to create a winning combination. Collect and repeat.

That’s nice and all, but it doesn’t even scratch the surface. The bonus features are what really rock the Annihilator slot game, and trust us, there’s more bonus here than you can handle!

We have to hand it to Play ‘n Go. The team has really outdone itself with this one. The Annihilator slot game was designed flawlessly, creating a thrilling adventure for all gamers to revel in. The reel symbols are all fitting to the thrash-metal band theme. You have low-valued card symbols from ten to ace. These are carved in sleek stone, with blood splatters sprayed across each one, naturally. Higher-valued symbols include a tortured soul trapped in a broken mirror, the famous Epiphone Annihilator II guitar, and Alice creepily clutching her doll, Clare.

All of the symbols are painted in a horror-flick fashion, aimed at maximising the fear factor as well as the twisted and macabre atmosphere. All we can say is Play ‘n Go, mission accomplished. In terms of the specialty symbols, the Annihilator slot online game has three. The wild symbol is Jeff Waters, Annihilator’s lead vocalist, an amusing addition that fans are sure to enjoy.

Lucifer on fire is the scatter symbol for the Annihilator slot online game. Get three of these to trigger the Set the World on Fire bonus feature. During this feature, you’ll be awarded 8 free spins, but you can retrigger more free spins throughout the bonus game.

The fun palace feature lets you pick dolls with prizes hidden beneath them. This includes multipliers ranging from 1x all the way up to a staggering 50x. If you uncover a scatter devil symbol, you’ll trigger the Set the World on Fire feature.

During this feature, you will be given an expanding wild to cover the entire reel. At the start of each free spin, the expanded wild will move to the next reel, trailing a blazing fire in its wake. If a wild symbol lands on any one of these burning squares, all of the illuminated reel positions turn wild. Every single time you get a scatter symbol in this feature, you’ll earn two more free spins. You can trigger up to 50 more free spins and win up to 5000x your wager.

The in command feature is triggered randomly in the base game. When this happens, wild symbols will expand to cover the entire reel. In addition, in the event that there is no win triggered by these expanding wilds, the reels will continue to respin, and the wilds will stay on the entire reel until the end of the feature. Wild!

In addition to having its own phenomenal Annihilator-worthy soundtrack, the Annihilator slot game allows players to upload their own music to listen to while they play away the hours in this macabre slot machine.

The Annihilator online slot machine was designed by Play ‘n Go, one of the top producers of digital slot machines today. The blokes down there have really set the bar high with this machine both in terms of design elements and bonus features. But Play ‘n Go has a lot of excellent titles in its library, including Testament and Ring of Odin.

Check out the Annihilator slot machine on mobiles and tablets as well as desktop devices. Gamers find this slot machine even more appealing on a hand-held device, with all of the same features and cool music to boot.

Ok, that was awesome! Give me more music-themed slot machines, please!
If it’s music you love, then check out these music-themed slots that are sure to please, including Motorhead, Jimi Hendrix, or Guns n’ Roses from NetEnt.
There are so many bonuses, I can’t keep track! How does it work?
There are three great bonus features in the Annihilator slot online game; Set the World on Fire, Fun Palace, and In Command.
Is this the official Annihilator slot game for the band?
As a matter of fact, it is. You can play eight different Annihilator tracks during the game, picking favourites or putting the playlist on shuffle.
What is the RTP/variance of the Annihilator slot machine?
The Annihilator game is a high variance slot with an RTP of 96.2%. That means you may go a bit of time without a win, but when triggered, the wins are colossal!