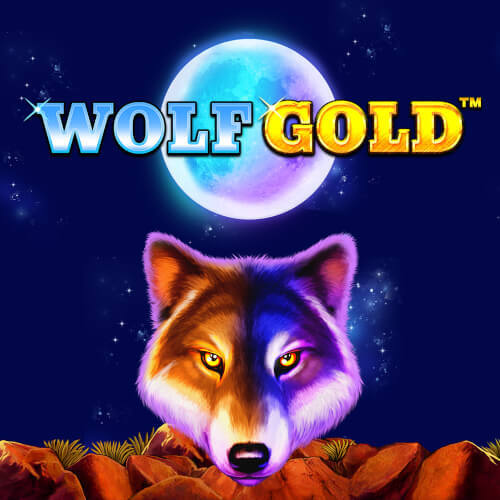 Wolf Gold slot online is a 5-reel, 25-payline machine with some of the most exciting bonus features you’ll find in any slots machine online. With a 96% return to player, fun graphics, and features that help the game move as fast as you want, the Wolf Gold online slot machine is a great choice for players who love exciting new games.

Everything from the majestic howls of the wild wolf to the decidedly different features makes the slot machine a top pick. And the fact that you have a chance to win from multiple jackpots makes this an even more appealing option to players.

The Wolf Gold game plays against the setting sun of a deserted savannah landscape. The rock formations and sparse plant life create a good setting for the wild terrain. But the gradient sunset colours and the twinkling stars in the newly-bejewelled desert night sky really set the tone. The ambient music and realistic sound effects definitely add flavour to this already intriguing game.

The Wolf Gold slot online looks different than your average slots machine. That’s because it has 5 reels but 25 paylines that are always active. So, the winning algorithm is very different from what most players are used to. The nice part of having 25 paylines is that you have many more opportunities to win.

Pragmatic Play has done a nice job with the graphics here. When the wild symbol helps to trigger a win, the wolf heads actually turn and howl at the moon, an artistic trick that adds much to the whole atmosphere of the game.

The Wolf Gold slot online is already different in setup and gameplay. What’s more, there are three jackpots to play with at all times. You could win the mini, major, or mega jackpots, depending on your bets and reel values. To have a chance to win the major jackpot, you’ll need to trigger the Money Respin feature (explained below). Once this feature is triggered, you need to get three of the same jackpot symbols during one of the respins to win that jackpot.

Players who like a little variety will enjoy the Wolf Gold online slot machine. Its various twists make it different from the norm, but you won’t have to spend hours learning a new game. Gameplay is pretty easy to pick up. Here’s how it works:

The Wolf Gold online slots also has a cool feature called turbo spin. When you hold down your space bar, the reels will automatically spin, one round after the next. You don’t have to stop to place or confirm your wagers. It’s like autoplay, but you control it. And it’s MUCH faster. So, if you feel the need for speed, this is going to be a favourite feature.

The entire Wolf Gold slot game is a fun experience, but where you’ll really start to feel the excitement is in the mega bonus rounds that continuously hand out more and more free spins.

While the Wolf Gold online slot machine is an excellent play for many reasons, the majestic animals are really the stars of these reels. You’ll find a strong-headed bison, proud bald eagle, wild stallion, and majestic bobcat throughout the game, and these characters increase in value as you go through the list. There are also the royal card faces to play with as lesser-valued icons.

The foreboding wolf’s head is the wild symbol that you can plug in for any other symbol (excepting the scatter and money symbols). The scatter symbol is the savannah backdrop lit up with a golden sun, and it’ll appear on reels 1, 3, and 5. When you get three of these symbols on one of those reels, you’ll trigger 5 free spins. And that’s when the action really begins. The extra features will be activated, and all sorts of bonuses can be triggered, including:

When you trigger the free respins, the wild symbol feature is activated. The second, third, and fourth reels will converge into one single, giant wild symbol. So, you automatically have those wilds to make up winning combinations with the two remaining reels.

Plus, during the free spins, you can trigger more free spins every time you get three scatter symbols on the reels. This feature is unlimited, making the Wolf Gold slots game an exciting machine.

Pragmatic Play is not one of the biggest software providers, but it still produces some top-notch digital games. The developer has a nice set of slots machines, live casino, bingo, and other gaming opportunities, and works with most of the big online casinos.

You might not be familiar with some of the Pragmatic Play games, including Release the Kraken, The Wild Machine, Mysterious, and Aztec Bonanza, but get familiar with them. You’ll be glad you did. Pragmatic is known for creating beautiful slots with almost art-like graphics and some of the coolest bonus features you probably haven’t played with yet. And if you’re into the up and coming, look out for John Hunter and the Book of Tut, one of the soon-to-be-released slot games from Pragmatic Play.

The Wolf Gold works on all mobile devices, including Android, Windows, and iOS devices. The games run smoothly, without any hiccups. And what’s more, all of the cool features that you are used to from the Wolf Gold online slot machine desktop version have migrated nicely over to mobile. So, you won’t miss out on any of those features, which is fortuitous, because the bonus features are essentially the meat and potatoes of this slots machine.

Which of the regular symbols on the Wolf Gold slot machine game pays out the most?
The buffalo. While it's not a special symbol, the buffalo can pay out up to 20x your base wager.
Am I limited to how many free spins I can trigger?
No. The Wolf Gold slot game has unlimited free spin trigger potential.
What do each of the jackpots pay out?
The mini pays out 30x your wager, the major pays out 100x, and the mega pays out 1000x.
How does the space bar make the game go faster?
Hold down your space bar, and the reels will keep spinning, only stopping on wins and increasing the speed of the game.