Slingo Deal or No Deal Slot Details and Features 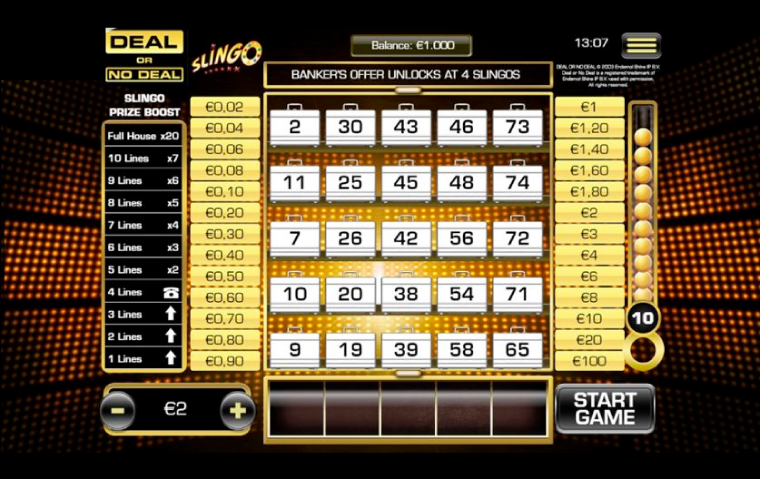 As is typical with other Slingo titles, you will be presented with a 5x5 grid, but instead of reels, this Slingo Deal or No Deal casino slot is filled with a collection of numbered boxes that are associated with the TV quiz show. Each box has a prize hidden inside it, which could be worth any of the amounts listed on the blue paytable on the left of the grid or the red paytable on the right.

The symbols of Slingo Deal or No Deal online slot are few:

The Slingo Deal or No Deal slot bonus has an RTP of 95% and it has a player-determined volatility. Which means, for the game mechanics of Deal or No Deal, players can play it safe or risk it all.

How To Play Slingo Deal or No Deal 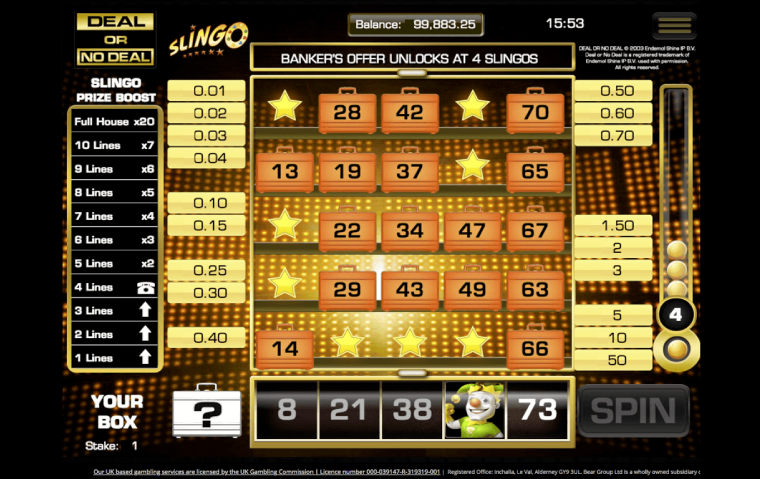 Play Slingo Deal or No Deal slot and get ready to meet the banker.

If you manage to get five opened boxes next to each other (horizontally, vertically or diagonally) this creates a Slingo (yup, just like Bingo!). Each Slingo you get will move you up a place on the prize multiplier bar located to the left of the grid. If you manage to get 4 Slingos, you’ll unlock the Banker’s Offer and will have three options:

You are given the offer every time you spin with the same three options available, so don’t think that it will never come back if you deny it once!

Review Summary of Slingo Deal or No Deal Online Slot

This Slingo Deal or No Deal online slot review showed you the same thrills as the tv show. We must admit that Deal Or No Deal Slingo is highly entertaining, the graphics are awesome for a Slingo game, and the gameplay sublime.

Unity Not Protests Is Required

The cost of living crisis continues to hit the country hard however if we continue to treat the government with utter contempt, the moral fabric of this great nation risks being ripped apart like cotton wool.

Heatwave was Too Much To Handle

I don’t mind the sunshine but this heat has been too much to handle and is not British weather at all! The public will be upset, yet I’ll be smiling from ear to ear once the sky returns to its rightful gray.

I admire Priti Patel for her leadership and dedication to Britain and wouldn’t be against her one day taking over the reins in Downing Street and leading our great nation with dignity.