Yggdrasil powered the Gem Rocks slot machine on 6 reels, 4 rows, and 4,096 paylines. If you’re a fanatic of gems, rocks, and mountains, this ones for you. Learn the game’s cascading symbols, 'Gem Rock' features, and giant bonuses upon exploring this Gem Rocks slot review.

Check out the game’s winning streaks for that gigantic maximum payout of 9,000 times your stake. 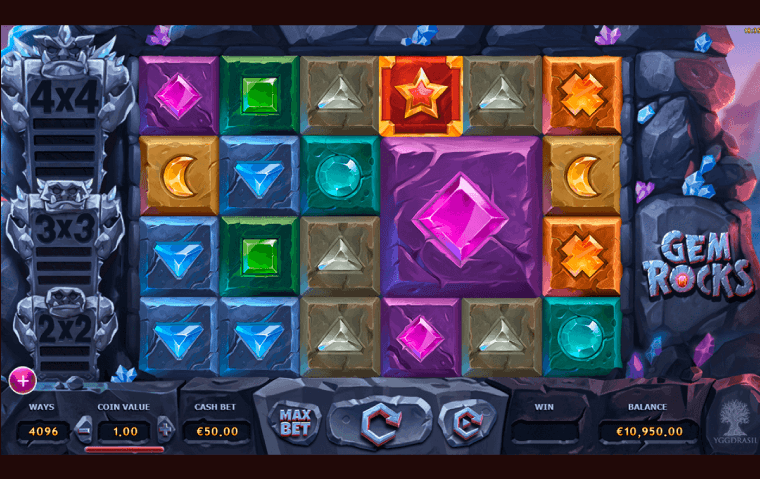 Took inspiration from the colourful jewels and gems, Gem Rocks slot uk cheers for massive prizes over its 4,096 ways to win. The 6-reel, 4-row layout is set on impressive visuals of crystals and animated various gemstones.

The betting range for Gem Rocks slot is limited to a minimum of 0.10 and can go up to 50 as the highest stake available. This wager option together with its RTP rate of 96.2% can dock you the maximum payout of 9,000 times your bet.

Fantasy themed Gem Rocks mobile slot is positioned in a 6x4 grid of jewels and magic set up. The animation is well presented on the rocks, stones, and symbols on the reels. The game comes with 8 prominent symbols that pay for three of a kind in a payline. The primary symbols for the Gem Rocks casino slot are colourful figures made of rocks, stars, diamonds, and triangles. The most high paying icon and valuable symbol  is the Red Star that awards 200 for every five of a kind in a winline.

Gem Rocks online slot has a Return To Player valued at 96.2% in this rock-ing 6-reel, 4-row gameplay. If this generous RTP is partnered with incredible chances of winning, it can land you the maximum payout of a whopping 9,000 times of your stake. This will be on top of the 4,096 ways to win thanks to the equally generous Yggdrasil Gaming.

How To Play Gem Rocks 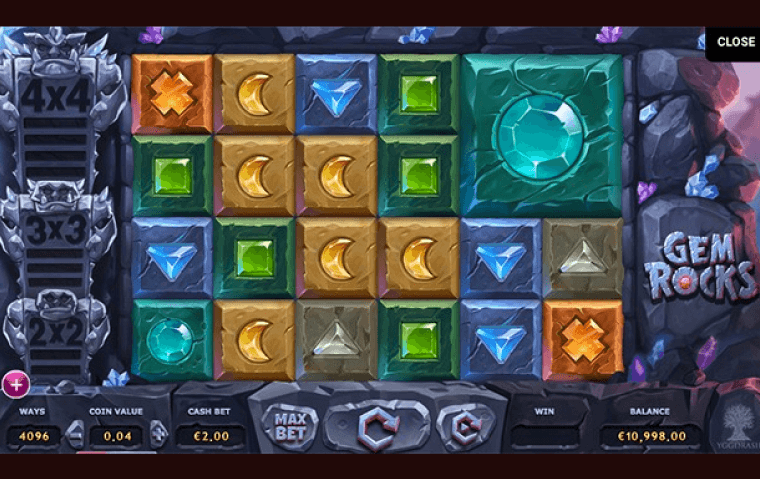 It was previously mentioned that Gem Rocks online slot has eight regular symbols available in the reels from left to right. The win is triggered for every three of a kind in an active payline.

There are only two simple steps to start the game - first, choose your stake from 0.10 to 50 and second, press the Spin button. Once started, you will see three stone-like buttons at the bottom of the reels. To spin, press the central arrow button.

As you play, take note of the eight standard symbols that you can win. To name a few, it has an orange X, a blue crystal, a purple diamond, a green square, a grey triangle, a turquoise circle, a brown half-moon, a red star, and a gold star.

The Gem Rocks slot bonus doesn't come with classic free spins and instead set out other features:

This grants a guaranteed win as 2, 5, or nine consecutive dropdown wins awards you 2×2, 3×3, or 4×4 Monster Rocks symbols. Monster Rocks can be transformed to be any standard symbols to form more winning combinations.

As you learn more about the game in this Gem Rocks slot machine review,  the graphics are noticeably impressive. It is seriously grand on its own and a soundtrack that fits the layout. The traditional 6x4 was elevated by its 4,096 ways to win and a massive 9,000x your stake highest payout.

Learn the detailed Dropdown Wins and the Gem Rock Feature in this Gem Rocks online slot review in case you’re targeting the maximum payout. Play Gem Rocks slot as it is absolutely mobile friendly and you can play as you please.

Farewell Roger, Thanks For The Memories

Roger Federer has done amazing things for the sport of tennis and he leaves behind a legacy that will be hard to beat. You could argue if he’s truly the greatest ever, but he is surely up there.

The Pound Will Always Be A Sought-After Prize

The Great British Pound’s legacy will not be tarnished because of a few months of economic struggle, and we will surely see its value soar once again.

I Applaud You Tim Martin

Wetherspoons boss Tim Martin deserves credit for having to make some tough decisions in the face of the current economic crisis.